...otherwise known as the time I found out I was going to be a father.

There is a moment in every young man/old boy’s life when all of your fears, all of your anxiety, all of your arrogance and disobedience boil to an unprecedented and scolding temperature.  It is that moment when the embodiment of your debauchery of the past grabs you by the throat and slaps you around like Monty Python’s fish slapping dance.  It is the very brink of everything horrifying, catastrophic and fatal that you could possibly imagine:  Your girlfriend misses her period.

Fortunately for me (or so thought my former asshole self), that happened all the time.  If it didn't happen, I would have thought twice about it.

Did we not have sex this month?  Unacceptable.

It was an accumulation of being stupid, getting lucky and being unbearably cocky (no pun intended). At the time though, it was really just a matter of enjoying sex and knowing for an absolute fact that only happy and exciting things happen when you embark on the euphoric journey of fornication.  There were no consequences, except for the time I farted much too loudly to justify a false cough or the time I got a miserable cramp in my calf and fell off the bed into a sweaty pile of irreversible regret of all things ever. 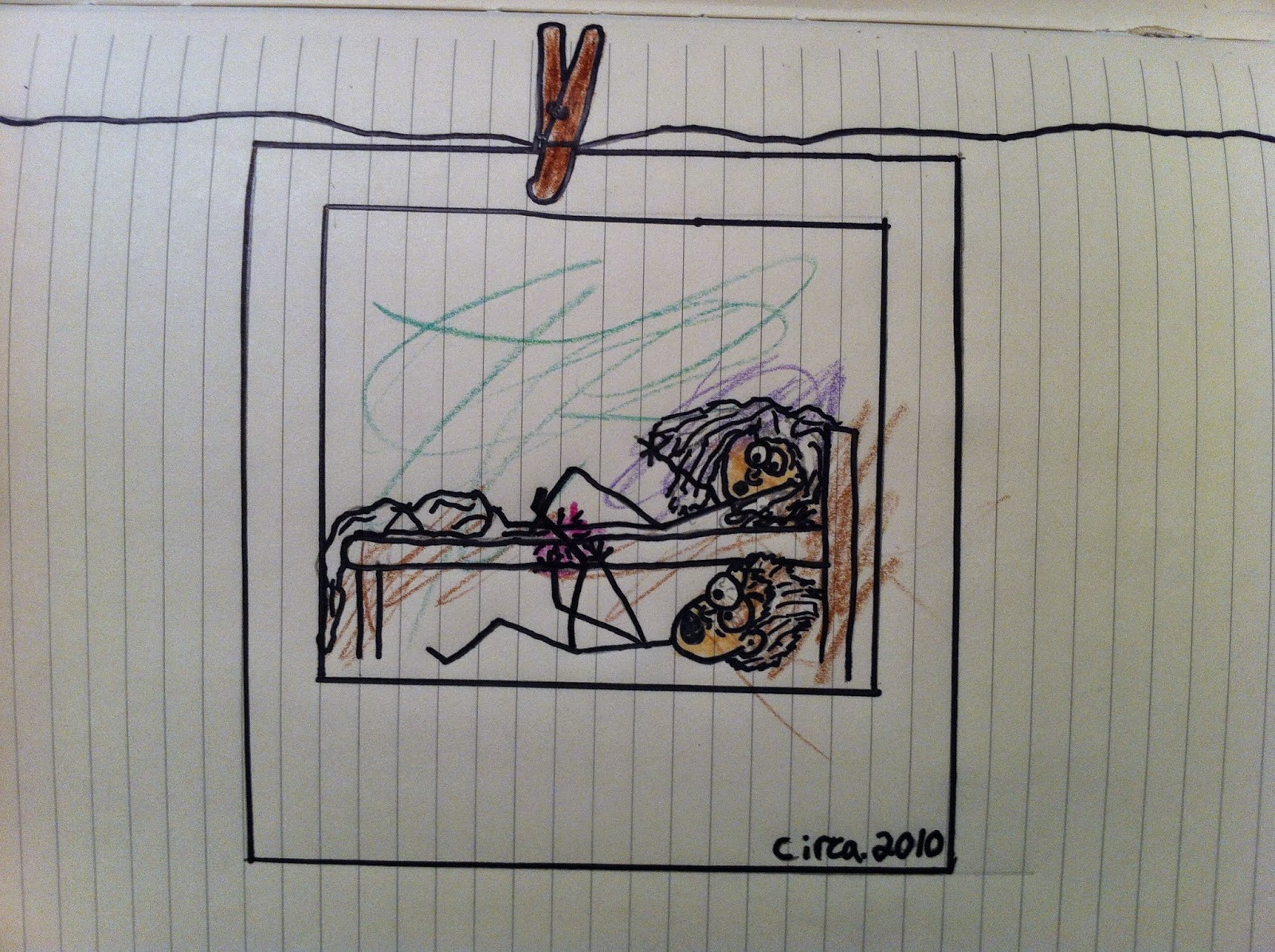 On the last weekend in August 2011, at the incredibly wise and all knowing age of 20, I was standing around Spencer’s Gifts staring at a pair of Batman earrings that would have quite obviously made me the dark knight of sexiness (though months later made me the caped douche bag).  Unfortunately for my impenitent soul I was not a patron, I was an employee, and as such I had nothing better to do than imagine my innocent lobes kicking ass and taking spleens.  That was the moment that my co-worker began a conversation about missing her period, or rather missing a period in general.

Of course in my brainless head I felt that bragging was perfectly justifiable.

“It happened to Beauty the other day…she still hasn’t had it.  Not a big deal though, it’s like a common occurrence.”   *Laughs like an asshole.

On the first weekend in September 2011, I was pacing back and forth in my in-law’s garage while Beauty was inside peeing on a stick.

What a waste of twelve bucks.

I spent so much time convincing myself that this was all just a big misunderstanding that it took me far too long to realize that I was in fact pacing.

Why am I pacing if I’m not actually worried?

It was then that I fully understood the magnitude of the situation, which is of course not actually true in retrospect but at the time it was pretty fucking mind blowing.

What if she is pregnant?  How will I react?  Should I cry?  Should I smile?  What will the kid look like?  What will Beauty look like?  What if I’m a horrible father and my child turns out like Lindsay Lohan or Macualay Culkin?  Jesus Christ, what if I turn out like Macualay Culkin’s parents in Home Alone and leave the poor smelly bastard in the house because I’m an idiot and I have absolutely no idea what I’m doing and I go to jail because if it wasn’t a god damn movie they would go to jail and then I’d be in jail and my kid would be alone in the house and obviously Beauty doesn't fit into this equation because it’s entirely about me and oh my god I think I’m having a panic attack.

The feeling was very much like the time I was walking down the road as a wee lad to my friend, Devil-Dog’s house and I was suddenly overcome by the feeling that someone was watching me.  I did my best to convince myself that everything was fine and that I was overreacting, even checking over my shoulder a few times with my fists at the ready as though if someone was actually watching me I would be able to utilize my kung-foo skills that I worked so hard to perfect never.  The further down the road I walked, the worse the feeling got and I began to panic and imagine all of the torturous things that could possibly ingest my limbs and slurp on my blood.  I checked over my shoulder one more time for good measure and every bad thought that circulated my conscious very suddenly had a physical form:  It was a turkey, just standing in the middle of road staring at me.

This is the worst possible thing!

I stood there for a moment and stared back at this giant (fairly small), malicious (quite innocent) firebird of death (turkey), and it took a very rapid step towards me.  Without hesitation, I turned around and sprinted down the road, most likely in the likes of a penguin at the zoo that has literally nothing better to do than look like an idiot.   I turned around with tears in my eyes as I ran and to my horror, the turkey was actually chasing me.  It was straight out of the scene in Jurassic Park when they’re in the jeep and through the side mirror you can see the murderous spikes for teeth of the T-Rex as it gains traction and there is no hope left in the world of dinosaur parks ever again. 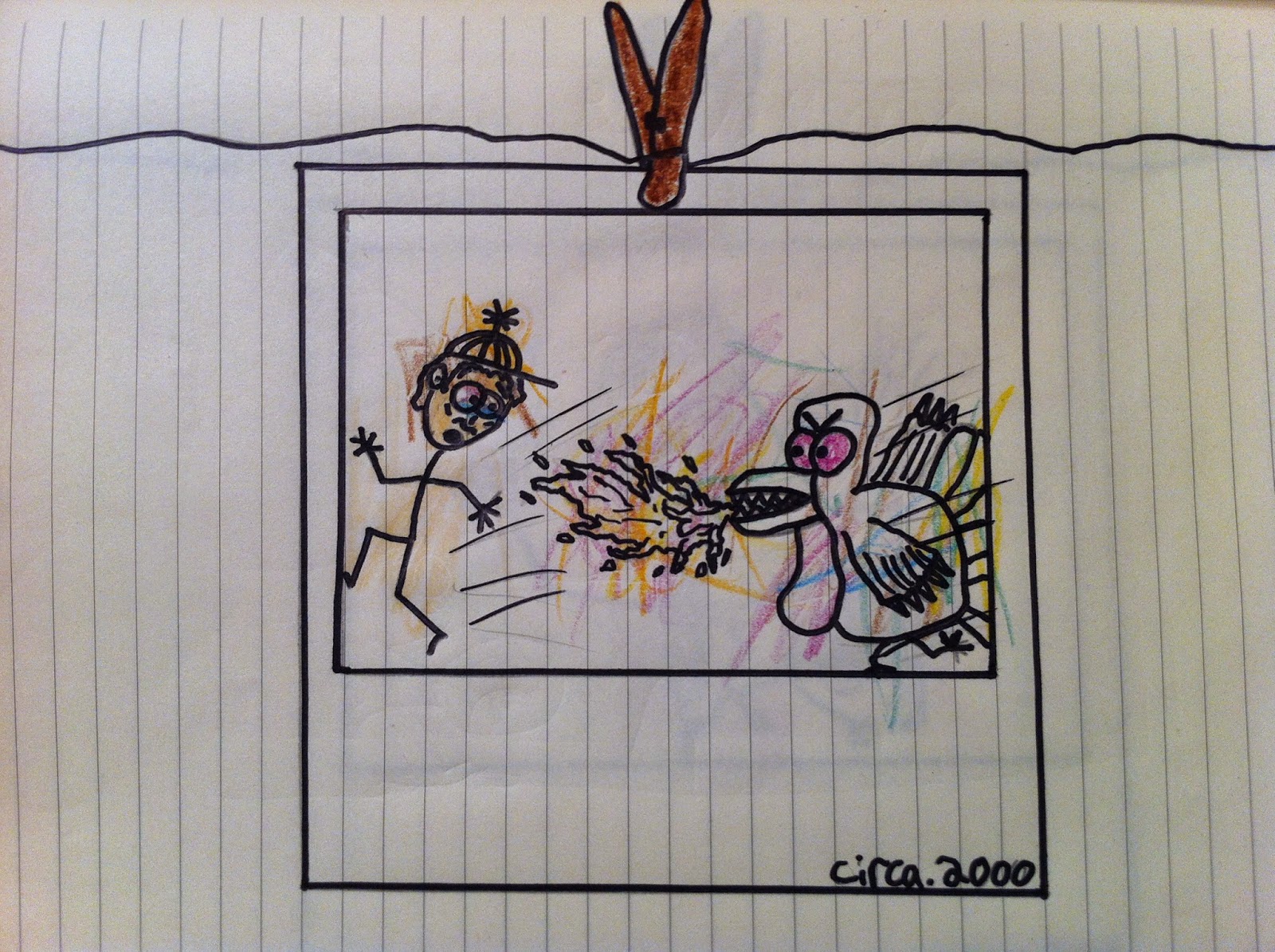 I am going to die.

I ran like Forrest Gump (if forest Gump was an idiot zoo penguin and the kids chasing him were a T-Rex/firebird of death/turkey), and did not stop until I was inside Devil-Dog’s house.   I don’t know how long the turkey actually chased me for and I don’t know what it wanted, but I remember how entirely traumatic the experience was.

Why is this relevant to Beauty peeing on a stick while I paced in her parent’s garage with a growing Macaulay Culkin phobia?  Because in retrospect, if perhaps I had stopped to think about what was actually happening and had I not panicked, the situation could have been quite harmless.  I will never know, but there is a good chance that if I had just turned around and gone up to shake the turkey’s wing, we could have been great friends.  Best of friends even.  I could have invited him over for Thanksgiving.

In all seriousness, I would have turned around and ran at the turkey and it would have gobbled and shat itself and ran off into the woods.  I would have been The Turkey Master; the Almighty Bird Whisperer; The God of Turkey Chasers.  I would have never been afraid of being chased by something I didn't understand ever again.  That was not the case, however, and about a decade later I was faced with paternity and my death was imminent.

Finally, after years of pacing and hyperventilating, Beauty opened the interior door and walked into the garage with tears in her eyes and the pee stick of terror in her hands.  The pink plus sign was vivid and irrevocable and my life was changed forever.  I can’t exactly remember my reaction, but I think I might have smirked and said, “oh shit,” because that is clearly an appropriate response to the situation.  Beauty cried and I began to panic all over again and the downward spiral of shit upon shit upon shit that ALWAYS happens to a young man when his life is utterly pulverized by the creation of a child…never happened.  I waited for it for quite a long time, like Fatpug when she expects bacon every waking second of every day, but it simply just never showed up.  Still hasn’t.

Fatherhood is a lot of things, but a spiral of shit is not one of them. 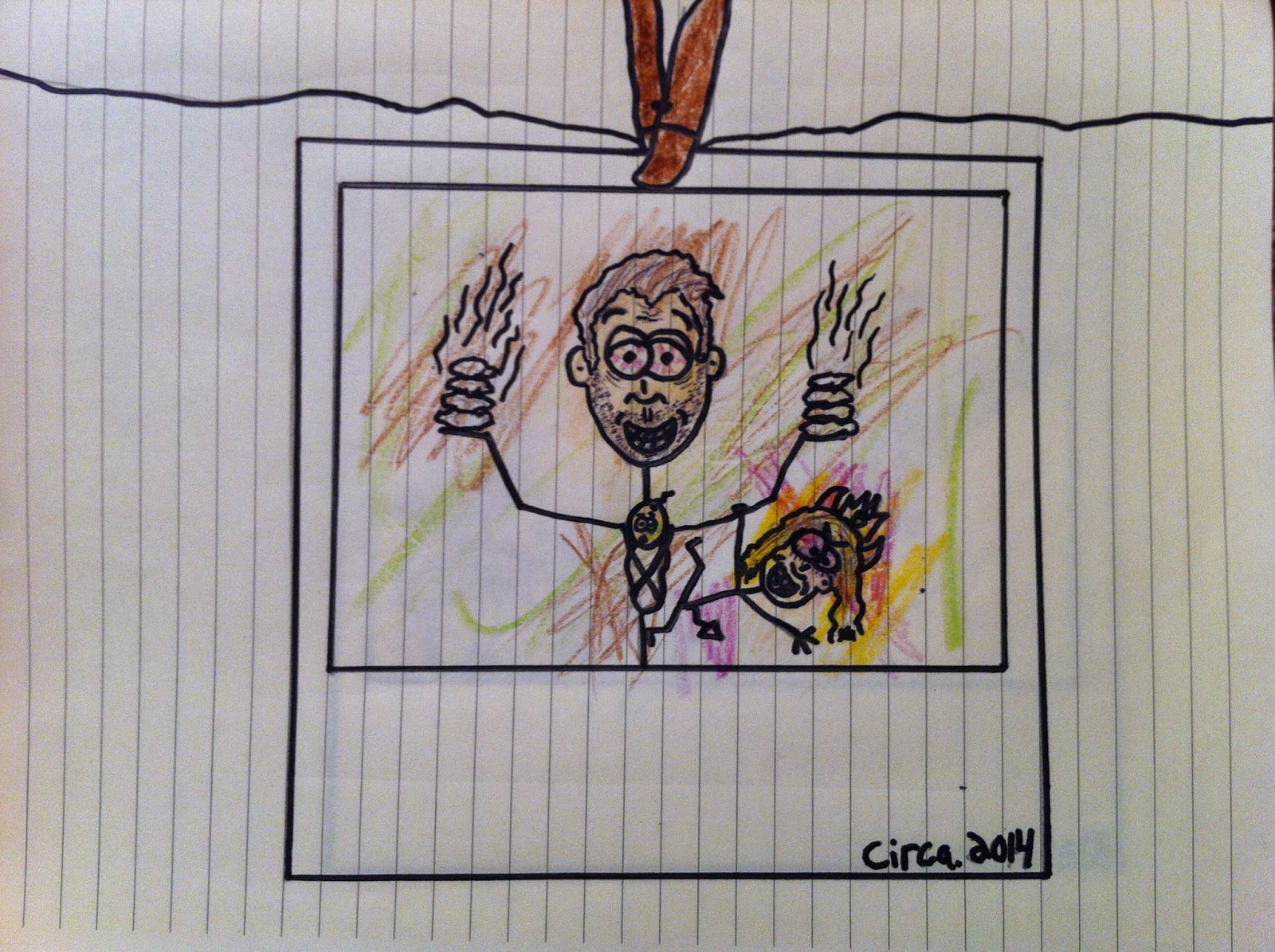 Unless we are speaking literally, and in that case…yes, yes it is.  So. Much. Shit. 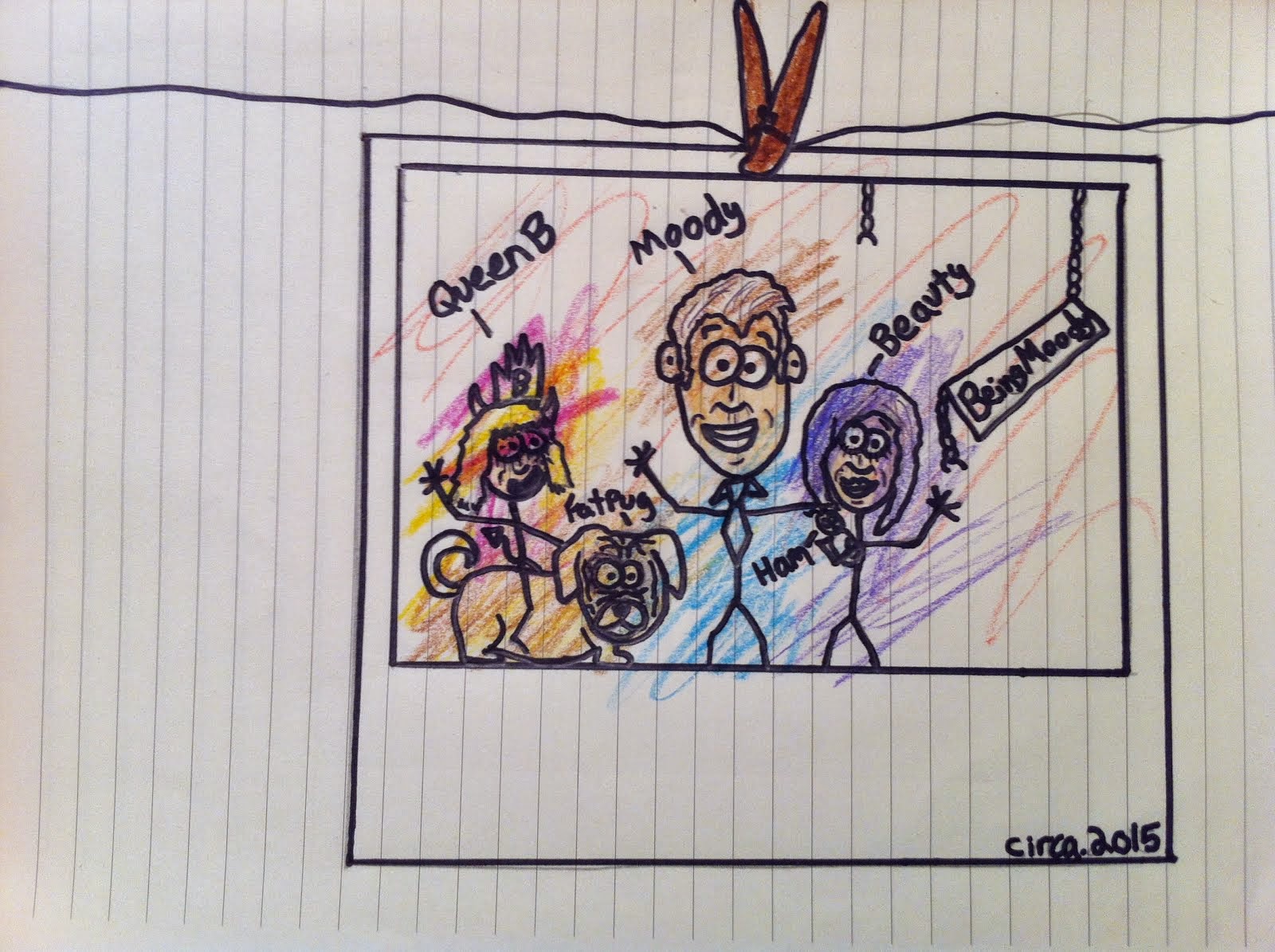